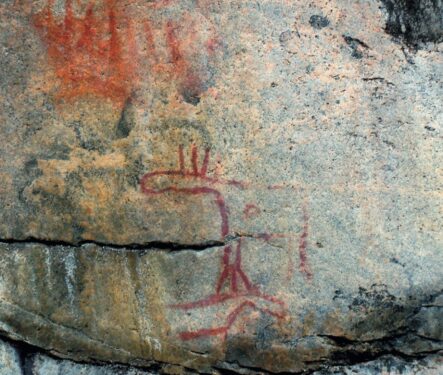 Astuvansalmi in Ristiina parish hosts the largest rock art site in the Nordics. In Astuvansalmi’s rock, a large side profile of a human face, formed by the elements, can be seen from the lake. Ancient humans possibly considered the shape of the rock to be a god or its image, and the place is thought to have been some sort of place of worship. Astuvansalmi rock paintings can be dated based on Lake Saimaa’s history. At its highest, the lake’s surface level was around 10-10.5 meters above the current water level. Before the Vuoksi River emptying Lake Saimaa formed, only the paintings on the upmost part of the rock could have been above water. After a thousand years, the surface level had fallen sufficiently to reveal the rock terrace in front of the paintings. The pictures at Astuvansalmi therefore date back to approximately 4000-2200 BCE. The painting area is around 16.5 m wide and 5.5 m tall. Around 80 pictures have been found on Astuvansalmi’s rock. The motifs include human figures, moose, boats, fish, lines, as well as hand and paw prints. In addition, the rock shows a covering layer of red. The most common pictures are a moose, a human figure, or a boat. The pictures were originally painted with falu red, a paint made from soil high in residual copper, and therefore the visibility of the paintings differs according to the season and the weather. A picture visible in the autumn might be hidden in the sunlight of the summer.