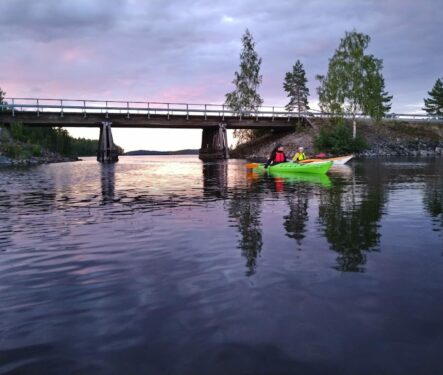 On the canal tour, you will paddle both in the sheltered mazes of the archipelago and on the outskirts of the big backs and in a culturally and historically interesting environment. As you paddle through the Käyhkää and Kukonharju canals, you can only imagine the hustle and bustle of the region in the late 18th century. At that time, a great Russian war hero, General Suvorov, decided to clear the fairway for warships from Lappeenranta to Savonlinna. Our own waterway, which required the construction of four canals, was needed because the only natural waterway, the Puumala Strait, was sadly on the Swedish side. Historically, therefore, you will paddle in the ancient border waters of the great powers. Pretty exciting. On the second and last day of the route, paddles through, already at that time, the strategically important Strait of Puumala. Then it is possible to deviate to civilization and stop in the church village of Puumala to eat vendace or actor Ville Haapasalo's hatsapuri.