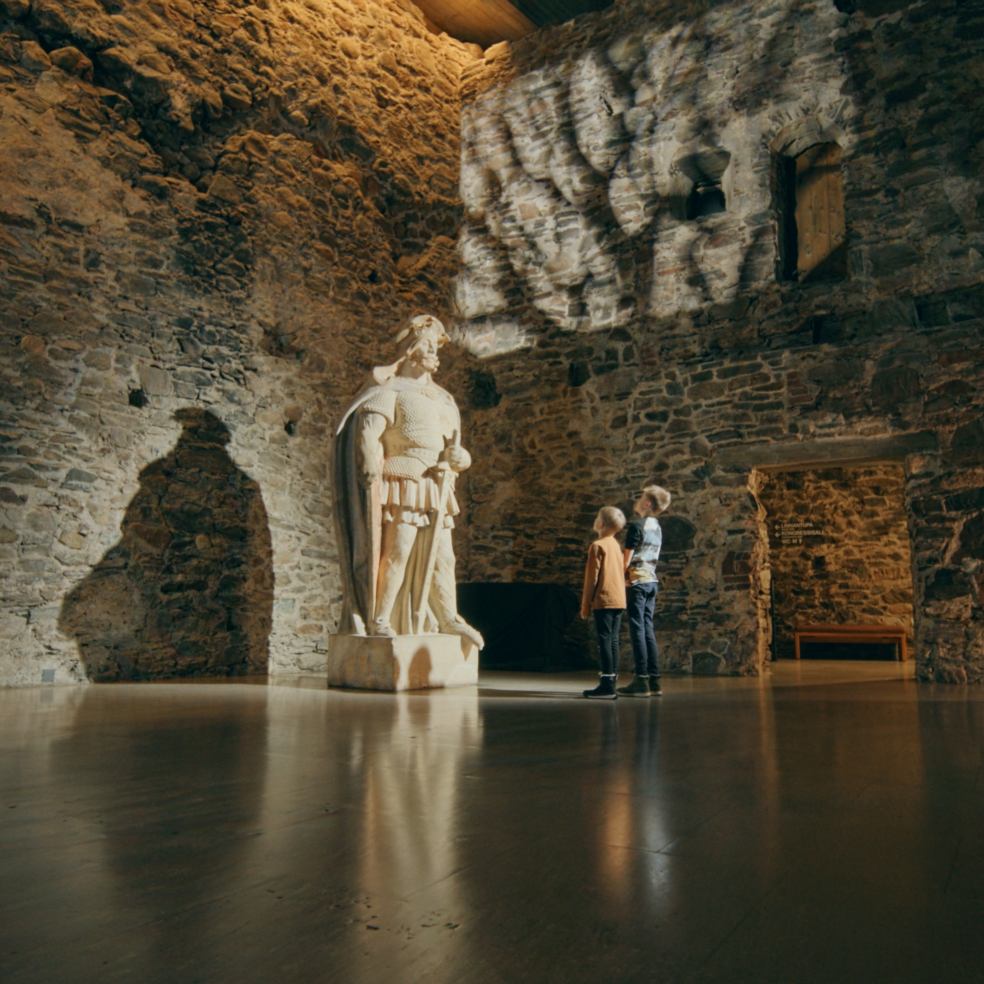 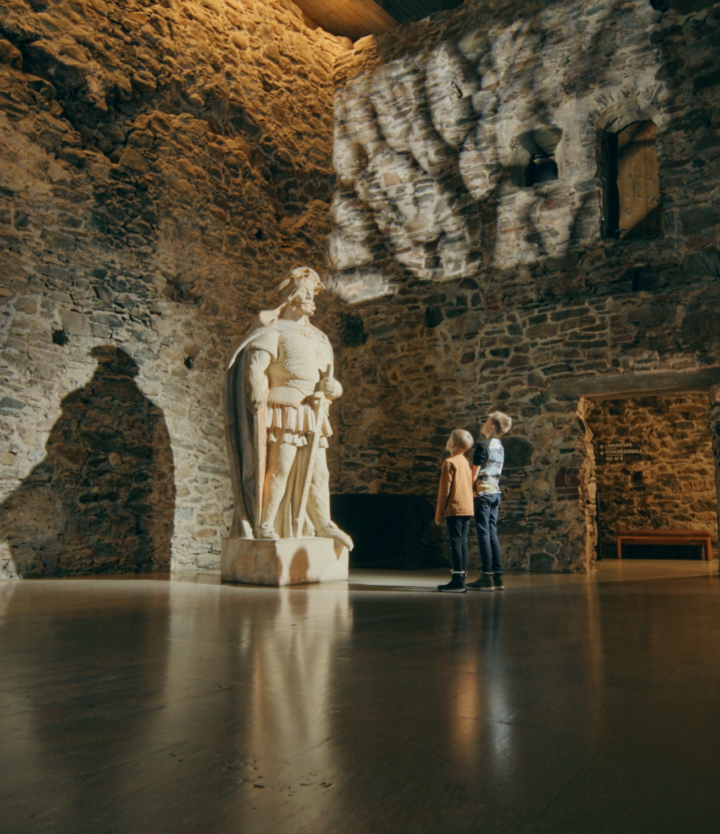 Lake Saimaa is full of unique attractions in towns, church villages and nature. In addition to the rugged landscapes, there are also magnificent buildings and a wide range of museums to admire. Some of the attractions are well known but there are also hidden gems in the region.

Beautiful Lake Saimaa has been attracting tourists since the 1700s. Over the centuries, ancient monuments and geological curiosities have been discovered in the area. On the other hand, tourism has also led to the construction of unique sites that delight tourists year after year.

In the neighbouring municipality of Imatra, Ruokolahti, there is one hidden attraction that has left its viewers in awe. How does that rock stay there? How did it get there? Kummakivi (Strange rock), located along a forest path, was probably formed during the Ice Age when a large boulder was left to balance on a rock.

In addition to Kummakivi, hikers can see some of the most spectacular sights on Lake Saimaa. There are several islands on Lake Saimaa that are great hiking destinations. One special feature is Ilknonsaari, on the Lappeenranta side, where several Orthodox tsasounas or prayer houses have been built along the path that runs through the island. There are also various geological attractions along the path, such as large granodiorite outcrops.

Astuvansalmi in Ristiina is home to the largest prehistoric rock painting complex in the Nordic countries. With more than 80 paintings it includes twenty moose, an equal number of human figures as well as boats, geometric patterns, a fish and a dog. Seen from a certain angle, the cliffs of Astuvansalmi look like human faces so the place was probably considered sacred. The rock paintings are painted on a curved rock surface and are best seen from water.

Interesting buildings in the middle of nature

In the Savonlinna region, tourists should visit the Punkaharju National Landscape. The beautiful natural landscapes have been attracting tourists to Punkaharju for over two hundred years. In addition to the stunning ridge landscapes, there is a wide range of nature activities and historical sites. The Finnish Forest Museum Lusto is well worth a visit where you can learn more about the development of Finnish forestry.

Kerimäki is home to one of the most interesting natural sites in the crystal-clear Lake Puruvesi on Lake Saimaa. The Hytermä nature reserve and museum islands are famous for their unusual stone structures. They were built in the area in the 1930s by Heikki Häyrynen, a man known by his nickname, Romu-Heikki. The most striking monument is the over 7-metre-high Work Monument on the main island of Hytermä.

If you are interested in stargazing, you should head to Härkämäki Observatory. Located about 30 kilometres from the centre of Varkaus, the observatory is equipped with modern telescopes and accessories. Weekly observing evenings are organised during the darker months of the year and guided tours for groups can be booked. Around the Härkämäki Observatory there is also a hut, a lean-to, a clubhouse and a nature trail with science-themed checkpoints.

Specialities in the middle of the town

In the past, steamships were widely used on the waters of Lake Saimaa transporting both passengers and commercial goods. Steamships are part of the history of the region and can still be seen, especially in the harbour next to Savonlinna’s market square.

Imatra’s wonderful city centre is well worth a visit. Finland’s oldest tourist attraction is the majestic Imatrankoski, whose free-flowing rapids are inspiring. Near the lake is Finland’s oldest nature reserve, Kruununpuisto, where you can see small and large giant’s kettles along narrow forest paths. On the other side of the rapids is Valtionhotelli, Finland’s most beautiful building which looks like a fairytale castle.

In Varkaus you can also admire the works of great Finnish architects. Varkaus also has two more unusual museums, the Tattoo Museum and the Museum of Mechanical Music. The Tattoo Museum, located next to the real tattoo studio, tells the colourful history of tattoos. The Mechanical Music Museum on the other hand houses a variety of musical instruments from the 19th century to the present day.

During the Second World War, Mikkeli served as the headquarters of the Finnish military command. You can learn more about the activities of the military headquarters in the Main House Museum, which is now part of Muisti, the Centre of War and Peace. Centrally located in the town centre, the War and Peace Centre Muisti sheds light on the impact of war on people and society. War history is also very visible in other parts of Mikkeli. At the train station is located Marshal Mannerheim’s saloon carriage which was in heavy use during the war years.

Castles and fortresses on the shores of Lake Saimaa

Over the course of history, several castles and fortresses have risen on the shores of Lake Saimaa, some of which still stand. Savonlinna is famous for its Olavinlinna Castle, which stands on a rocky outcrop. Built in the 15th century, this stone castle hosts guided tours and breathtaking concerts. The Savonlinna Opera Festival in July fills the city with happy festivalgoers. Tickets and accommodation for the event should be booked well in advance, as the Opera Festival is a highly regarded event around the world.

Kärnäkoski Fortress in Savitaipale is an interesting place to visit. The fortress was built as early as 1793 as part of the defence of St. Petersburg and its walls offer a nice view of Lake Saimaa. In summer, the fortress is home to a flock of sheep, which are very used to visitors. Be sure to close the gate of the fortress as you pass through to prevent the sheep from going on their own excursions.

Lappeenranta’s oldest district is the Fortress where you can still sense the city’s history. The beautiful old buildings, museums and cafés along cobbled street are great attractions in themselves, but every summer something truly unique appears near the fortress. Sandcastle in Lappeenranta is a major summer attraction for many. Each summer the sculptures in the Sandcastle are built around a particular theme so every summer it looks completely different. A team of Finnish and international artists are responsible for the sculptures. In winter, a snow castle for the whole family rises on the same site with slides for the little ones in the family.

Muisti Centre of War and Peace in Mikkeli

The Headquarters Museum in Mikkeli