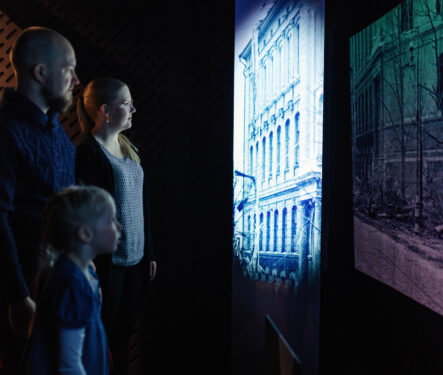 Muisti Centre of War and Peace is a modern museum which examines the effects of war from the perspective of human experience. The interactive exhibition at Muisti enables you to understand what war felt like for those who were confronted by it, how it affected society at the time, and how it still affects it today. The Finnish word Muisti means memory and remembrance. Wars are remembered in a number of different ways in different cultures. Muisti is a place where memories are stored. The old school building which formed the base of the Finnish military headquarters during the Second World War has been transformed into over 1000m² of exhibition space. The Headquarters Museum was established in the building in 1974, when the office of the Commander-in-Chief Marshall Mannerheim was opened to the public. At the turn of the century the interior of this part of the building was restored to its original state during the Second World War. Muisti and the Headquarters Museum offer a museum experience, in which the visitors learn about issues of war and peace, and war as a phenomenon. Muisti Centre of War and Peace shares experiences of war in order to promote peace. Muisti is for those who are interested in the history of war, and especially for those who are not.