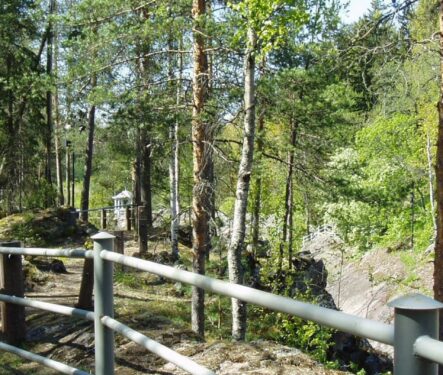 An oasis in the heart of Imatra. The oldest nature reserve in Finland along the banks of the rapids. Historical pavilions, rock engravings, giant kettles and several other interesting places to visit. The scenic value of the rapids was recognised early on and steps were taken to protect it. In 1842, Russian Tsar Nicholas I signed an order to establish the first Finnish nature reserve alog the banks of the rapids, Kruununpuisto Park. At first, an inn was built on the banks for people coming to see the rapids, followed by the first wooden hotel. After the hotel buildings were distroyed in several fires, the Valtionhotelli hotel was finally built of stone on the banks of the rapids in 1903. Designed by Usko Nyström, the Valtionhotelli is among Finland's most significant buildings built in the National Romantic style. The Russian imperial family frequently visited Imatra. Other imperial admirers included Emperor Dom Pedro II of Brazil, whose signature is carved in the rock by the lower pavillion on the river banks. Imatra was also visited by many famous artists, such as composers Jean Sibelius, Alexander Scriabin, Igor Stravinsky ant Pyotr Tchaikovsky, and painters Albert Edelfelt, Akseli Gallen-Kallela and Ilya Repin. The rapids were depicted in a number of artworks.