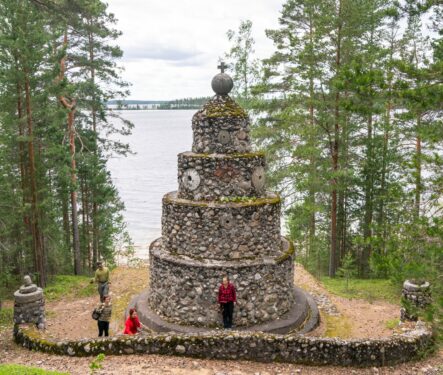 The magnificent Hytermä islands to the east of the Kerimäki village are regarded as the most beautiful islands in crystal clear lake Puruvesi. The islands are a Nature Reserve and a unique historical site. Hytermä is a perfect destination for a day-trip and it`s trails are easy to walk. Hytermä is known most of all for Romu-Heikki and his wife Lilli who lived on the islands. Heikki was a complex personality, known not only for his hot and stubborn temper but also his passion for collecting old objects. The most eccentric sight on Hytermä is the memorial built of rocks and millstones, completed in 1937. It is more than seven metres tall, and called "Labour Memorial – to commemorate the labour of past and future generations." The couple was so impressed by the islands' natural beauty that Heikki, in particular, began idolising them. No sacrifice was too great for his Hytermä. When describing his paradise, Romu-Heikki talked about the "Hytermä ideology" and compared Hytermä's rise from degradation to new splendour with the legend of the Phoenix. The Hytermä Nature Reserve is a summer destination and only accessible by boat. In nature conservation areas, everyman's rights do not apply in the normal way. Please always check the rules of Hytermä before making your trip. Hytermä is a nature reserve, whose key task is to safeguard biodiversity and enable people to enjoy and relax in nature on the terms of nature conservation. Hytermä is managed by Metsähallitus.