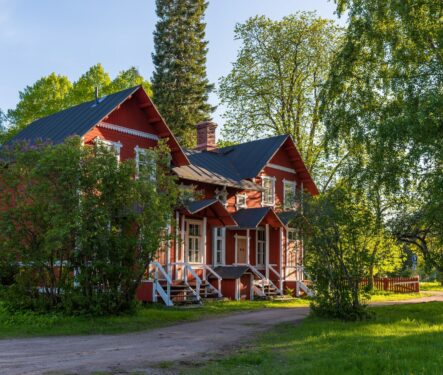 An exhibition on the living conditions of industrial workers in the 1900s and 1960s. Furnished apartments in a residential building and social services presented in a sauna building. Industry started gathering in the Imatra region around the River Vuoksi with its many rapids towards the end of the 19th century. Large-scale industry started to form when the limited company Tornator began building industrial plants in 1895 after buying a farm along the river. The farmland included half of the waterfalls of the Niskakoski and Tainionkoski rapids. The area started to become an industrial region. The company built approximately 20 residential buildings with multiple flats for its work force, first in 1896, and then over the following years. This formed the Ritikanranta residential area, whose buildings were called barracks. The flats, intended for families, consisted of a bedroom and a kitchen as well as a pantry, with a total surface area of 20-25 m2.