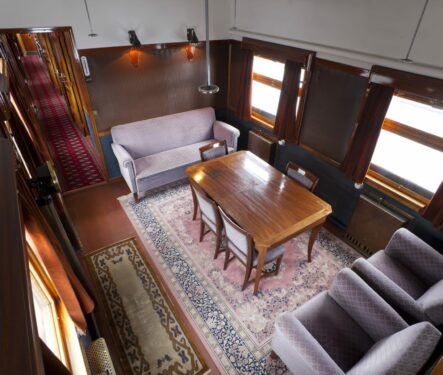 Marshal Mannerheim’s saloon car is the carriage that was used by Commander-in-Chief Mannerheim and his personnel in 1939-1946. The saloon car was finished in 1930, and it was put into operation on June 13, 1930. During the winter war, Mannerheim traveled nearly 79 000 kilometers with the train. The train was usually attached with two sleeping cars, restaurant car, conductor’s car, air raid defence car, and transportation car. The saloon car is open to the public once year, on June 4. The day is both Mannerheim’s birthday, and the Day of Finnish Defence’s Force. Take a look inside the saloon car at: http://salonkivaunu.mikkeli.fi