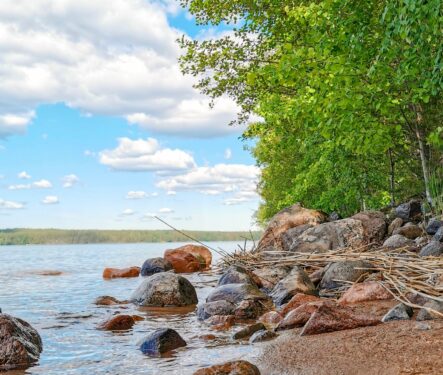 The Saimaa Archipelago Route is a traditional popular cycling tour in the southern Saimaa region, beginning from Lappeenranta. The route is 154 kilometer long with breathtaking views of Lake Saimaa. It is worth to book several days for it (at least 2-3 days) since there is a lot to see. Make the most out of the route and stop for a second to relax in pure nature, see the historical attractions and other sites, such as several Saimaa Geopark sites, in Lappeenranta, Imatra, Taipalsaari, Ruokolahti and Joutseno and enjoy local delicacies. Along the way there’s unique hotels, B’n’Bs and a possibility to camp on the shores of the beautiful Lake Saimaa. The route is especially good destination for geology enthusiastics to cycle along the vast marginal formations of Salpausselkä, shaped by the continent. The first Salpausselkä can be seen from Imatra to Lappeenranta and the Second Salpausselkä in Kyläniemi and Utula, Ruokolahti. There is a ferry transport on the route, which must be booked in advance. You can also book guided cycling tours from Saimaan Palju Events.