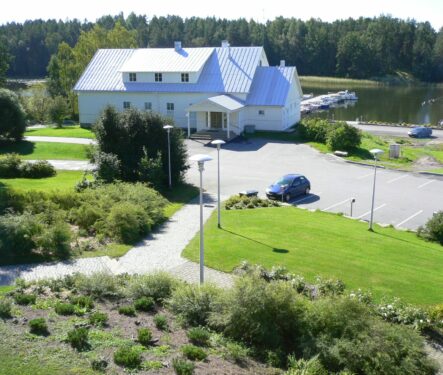 The old society house Väinölä has a colorful history behind it. During its more than 100-year history Väinölä has been celebrated countless weddings, funerals and evenings. There has been dancing, acting and watching movies. The first owner of the house was sacristan Erikson. After his death his widow sells the house to the Taipalsaari Youth Club in 1901. Over the years, the house changed owner several times and underwent many renovations as well as extensions. In the 1930s, Väinölä was owned by the Taipalsaari patronage. In connection with mobilization of 1939, the men from Taipalsaari left the guard house for war. During the Continuation War, Väinölä was in the use of the Defense Forces. When the Protectorates were disbanded after the war the house became the property of the municipality of Taipalsaari. Väinölä, which dilapidated in the late 1970s, was renovated and expanded to the multifunctional space. The old society house Väinölä is still commonly used as a place for events such as weddings and sports. For example Youth Society and local associations are organizing other many kinds of events.